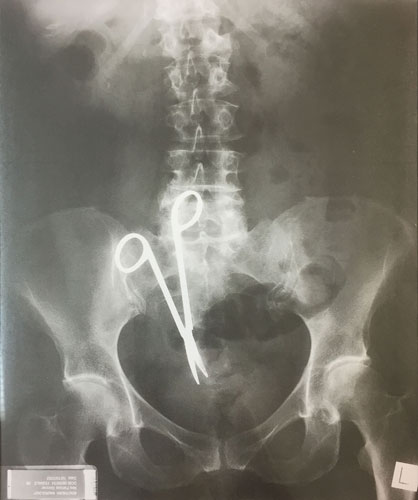 Issue: A patient lived for 18 months after a bowel operation with a pair of scissors lodged between her bowel and spine. After her complaints of pain were ignored, she re-presented to the Hospital demanding an abdominal x-ray, whereupon the diagnosis was made. Further surgery was required to remove the scissors and a small section of bowel, such that the main injury suffered by the patient was “nervous shock”.

Action: Before seeking legal advice, the patient created a website where people could post their experiences of medical negligence and also went straight to the media with her story. She was outraged that the Hospital management “closed ranks” on her and adopted the media position that there had been no breach of duty because there are no protocols to count for surgical instruments; only swabs.

The patient was genuinely shocked at the discovery and brought a conservative claims for damages which was significantly reduced on account of the recent tort law reforms (Healthcare Liability Act NSW 2001 and Civil Liability Act NSW 2002) that had been introduced just prior to her cause of action being discoverable.

However, the patient was offended by the Hospital’s response, leading her to attract considerable public and media attention in her “campaign” to tell the story of her ordeal and attempt to prevent the same thing, indeed any medical misadventure, from happening to others.

This is a situation where prompt and sensitive handling of the matter through “Open Disclosure” could have averted the adverse publicity that plagued the Hospital. This comprised a number of morning radio interviews, an editorial Opinion piece in the Telegraph, media articles in local newspapers and a number of television interviews.

Family Provision Claims on an Estate The … END_OF_DOCUMENT_TOKEN_TO_BE_REPLACED

The process of engaging a lawyer and making a … END_OF_DOCUMENT_TOKEN_TO_BE_REPLACED

The evaluation of the duty of care owed by … END_OF_DOCUMENT_TOKEN_TO_BE_REPLACED

Hi Bernard and thanks very much for everything yesterday.  We are extremely happy with the results and I think you END_OF_DOCUMENT_TOKEN_TO_BE_REPLACED